When you write a blog between Tel Aviv and Antwerp, it was bound to happen someday. Yes it’s time for a personal statement that I know isn’t shocking anybody who knows me: I have a thing for Jewish men.

I’ve given “the Reason Why” a lot of thought lately. I don’t care much about God, Jesus or any other prophet. I never fully understood the concept of how something that is supposed to be a good higher power actually divides so many people. I never really made a difference between someone who read the Bible, the Koran, the Torah or just believed in karma. So my preference to date Jewish guys has nothing to do with their belief, that’s for sure. I feel however that most of the guys I go for are Jewish (or, if they’re not, they probably look Jewish). Needless to say that when it comes to their looks, Jewish men are very “interesting”: the intelligent gaze of a young Leonard Cohen, the funny Adam Samberg, my high school crush Jeff Goldblum and the ultimate stud James Franco. My grandma always told me “van een mooi bord kan je niet eten” (freely translated as: you can’t judge a book by it’s cover), so Jewish men must also have a lot of good inner qualities. They are known to be smart and treat their wives with respect. They are family oriented and most of them have a good sense of humor. What sounds better than that? Another reason that I think of a lot is that it might be a more personal challenge, since dating someone who’s not suppose to date you makes you feel all “13 years old and secretly kissed a boy at school” again (minus the teen giggles). 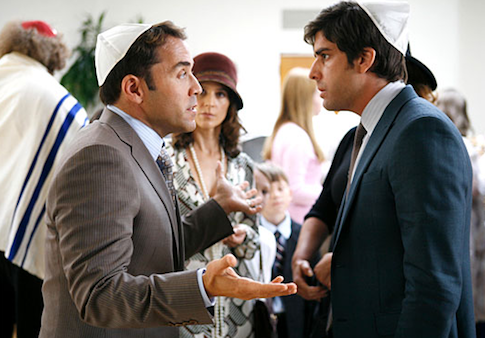 Anyway, who cares about reasons. Leo Dicaprio didn’t have a reason not to get on that piece of driftwood with Kate Winslet when he was floating around in icy water, so I don’t need a reason to like someone. Let’s say: I just do. But I am not Jewish. I’m a Shiksa, as they say in Yiddish (after looking up that word on Wikipedia I most definitely am a Shiksa: “Shiksa refers to any non-Jewish (gentile) woman or girl who might be a temptation to Jewish men or boys, e.g., for dating, intermarriage, etc.“). And this is kind of a problem.

But who am I to burst my own bubble? Let the men do that for me! So, after some serial Jew dating I learned that – like all men – Jewish men possess qualities that make me want to run in all sorts of directions, preferably faster than Forrest Gump on energy drinks.

Of course, I don’t generalize. The experiences I write about are totally my own. I would also like to point out that this article is purely written for entertainment, I am not out to hurt anybody and surely not to make fun of someones religion. It could very well have been Belgian Boys, or Italian Stallions.

1. The “I like dating you, but we have no future together… Or maybe we do… No we definitely don’t” guy.

There’s always this moment in time that you think “where have all the heroes gone?”. At that point I mostly meet a handsome dark curly-haired Mediterranean guy and I’m like “There he is!”. We talk a while, we go out together, watch a movie, have dinner, etc. Basically we’re having a very good time and all seems like a little fairytale with a handsome prince who’s really making an effort to make me feel every inch a women (for readers who’d love a soundtrack to this, click here). Who cares that he’s Jewish? I do what every normal girl does and I already start fantasizing about big family shabbat dinners (who doesn’t like a table full of food) and romantically lighting candles together on Hanukkah. A fairytale indeed. At the moment one least expects it (probably while watching re-runs of Sex and the City to remind myself again how Charlotte handled her Jew-man) he drops the Bomb (bomb being the awkward word). “I’ve thought about it and although you’re great and I have such a good time with you… you’re not Jewish and my parents would never approve.”

According to Jewish tradition, dating plays a very specific role. Dating is a serious matter and is not intended for entertainment purposes. Well, thanks for the heads up, but some Jewboys don’t seem to share that thought (they are probably the ones who invented the phrase “Shickses are for practice”). But then again, who cares? One can only appreciate honesty. And a busy girl like me doesn’t always have the time for serious dating. A little fling here and there never hurt anyone. So yes, let’s keep it casual! All seems to be going well for a few weeks, but then Drama kicks in. All of a sudden a statement like “you can see other people if you want, we’re casual” seems to be as untrue as Anna Anderson being the long-lost Russian princess Anastasia. Even if I didn’t see anyone else (why would I, when I have a gorgeous Jew man to satisfy me on daily basis), I’m being called names I’d rather not repeat. Maybe it’s the Jewish sense of entitlement, or just the mere thought of me actually living up to his self-proclaimed statement. Eitherway he turned into the Boy who cried Wolf. (I must admit though that drama in this story went both ways. I guess keeping it casual isn’t always that easy.)

Ah yes, they do exist. Some of the Jewish men don’t really care if they date a non-Jewish girl. But by then, i was already so submerged into Jewish tradition due to all previous experiences, I was like: “What? You’re not a very good Jew!” This is when I found out that I actually love the Jewish traditions and the “we’re one happy family”-feeling. How could I be part of The Family if he didn’t really care about being Jewish or not? And here come the question marks. Well, at least I found another reason to add to the long list of why I like Jewish people so much. 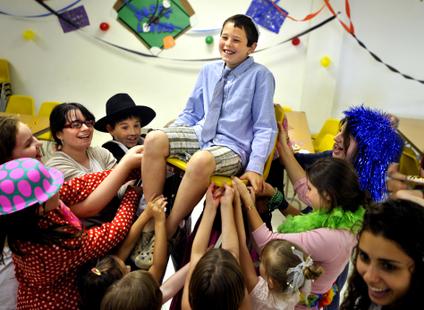 I must say, even though a lot of these stories ended in agonizing heartbreak (no not really), I have enjoyed every experience I had so far and the people I’ve met along the way. I would never wish for things to be different. Being the romantic naive fool I am, I’m sure that every experience made me grow and made me wiser about what I want, and how far I would go for someone who really deserves it. And I’m pretty sure we will all get where we want to be, with a wonderful person. In my case preferably Jewish. 🙂