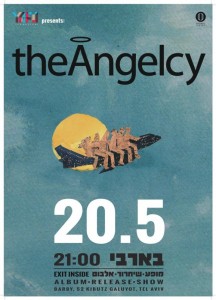 On Tuesday May 20th theAngelcy will be performing live at the Barby to celebrate the release of their well expected album ‘Exit Inside’. TheAngelcy, a most unusual Israeli Indie band, speaks of a very personal, local and contemporary reality in universal, international English that is both simple and poetic. The band’s music is being arranged in a tiny room in one of the most under developed neighborhoods in Tel Aviv, and from there reaches hundreds of thousands of listeners around the world, featured on radio, television and cinema, and of course on stage, in venues and festival in Israel and abroad” Tickets: www.barby.co.il 03-5188123 https://www.youtube.com/user/theAngelcyOfficial 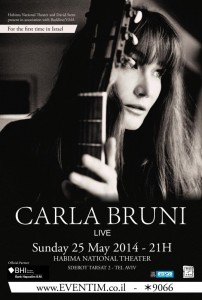 On Sunday May 25th,  the stage of the prestigious Habima National Theater will have French-Italian singer-songwriter Carla Bruni-Sarkozy. She will perform her first concert in Tel Aviv ever. Her 2 biggest hits are “Quelqu’un m’a dit” and “Raphaël” have over 20 million views on Youtube. Until today, Carla Bruni has sold more than 3 million albums. During her modeling career, she has been the muse for several international luxury brands. Carla Bruni said to be “crazy about Israel”, a country that she really wants her son to discover. She will be visiting the country with her husband and ex French president Nicolas Sarkozy.

Tel Aviv is living good show business times these days. Lots of international artists are heading our way this summer. I myself am currently working on the amazing Justin Timberlake show, happening Wednesday May 28th at the Park Hayarkon – Tickets: www.leaan.co.il *8780.