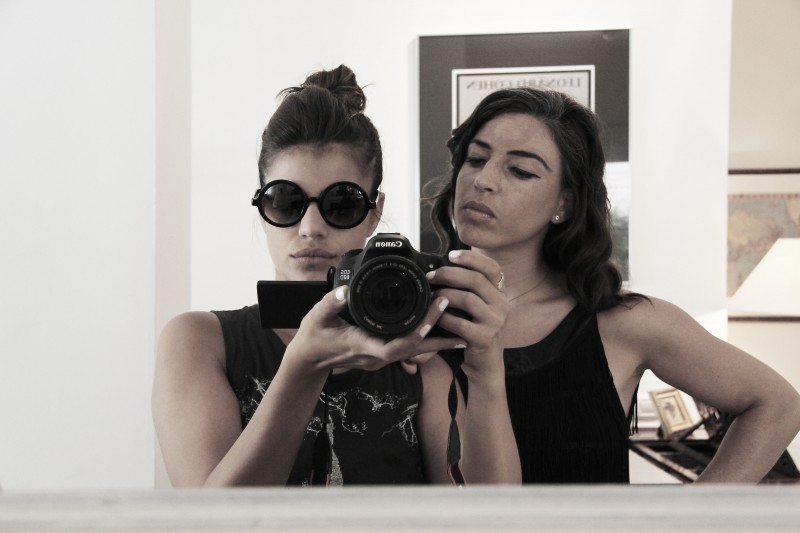 Working as a freelance producer you hop from one intense time job to another. When you have some time off in between (AND you finish all your other to-dos) it’s a pleasure to spend it creatively and passionately. Do you know that feeling when people just give each other great ideas and energies to go DO something creative? That’s called inspiration. I wish more people would have this kind of effect on each other and would use even their fears, demons and tears for producing positive things instead of wasting time on complaining whining & moaning. “Excelsior” – for those who’ve seen Silver Linings Playbook. Life is beautiful, we just need to see it, be grateful and embrace it, even in darkness. ‘There’s a crack in everything, that’s how the light comes in’ (L.Cohen) 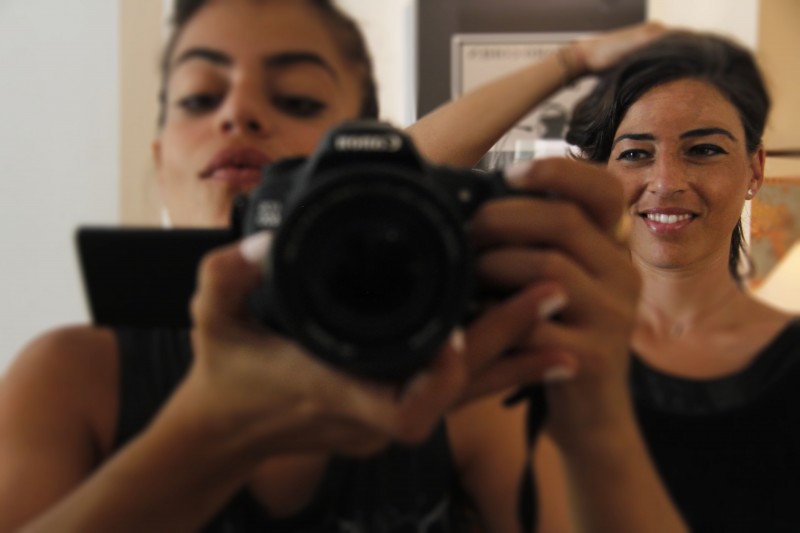 We only needed a few minutes to throw some ideas and the girl was already filming. Shiran Pomerantz is the name and photography is her game. She likes Lana Del Rey, I like Leonard Cohen so the song choice was easily made. Black & White for the vibe. Location: my house. Shiran’s Canon 60D. She would edit it and in a few hours it was already online. We weren’t supposed to get any lighting, props, production or hair and make-up but by total coincidence some colleagues were using my back terrace for a TV-shoot so we ‘borrowed’ their hair services. While filming the intro, the Babyliss slipped out of the hairdresser’s hand and landed warmly on my shoulder. No panic, just some skin off, lots of cream, helping hands and a pretty wound. They say my skin heals fast. And then it leaves you with a little scar…

In the (almost) decade i’ve been residing in Antwerp, it never seized to amaze me how much talent this city holds. And I for one, like young creativity. Especially young creatives who manage to make us stop and gaze at beauty, instead of passing by – “on to the next one” – in this very fast and contemporary art world.

Frederik Schnieders. I haven’t known the guy for long, but he’s an artist. Why? He makes me stop and look, wonder and admire, think and re-think, evaluate and sure as hell smile. “Quand on a que l’amour pour les autres.” When you only have love for others. People who can carry catchy phrases like this are worth to get to know.

Frederik, born in 1977, studied painting at the Royal Academy of Fine Arts in Antwerp. From the beginning his primary interest was the human figure. Studied and cultivated through figure drawing, he has now transformed his work into his own appreciation of the female: a young, rock’n roll, independent woman that emphasizes her role as outcast, idol, bad girl or just plain femme fatale. His paintings are set in a world of written words and reflect the impulses of the moment, with reference to all time heroes in music and other art forms. Frederik uses a mix of charcoal, Chinese ink, markers, aqualaque, stickers, paper pieces, spray paint and acrylics as his tools. This gives his work the right edge. Every painting is a discovery of little quotes, poems, thoughts and insights in the artist’s soul. 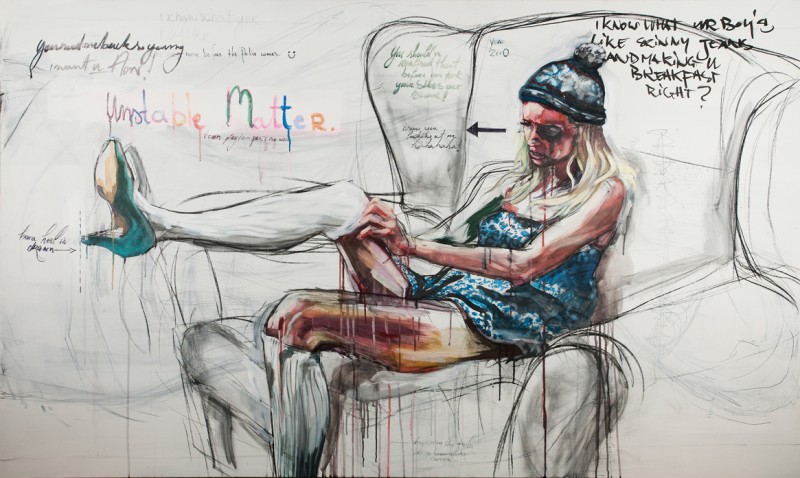 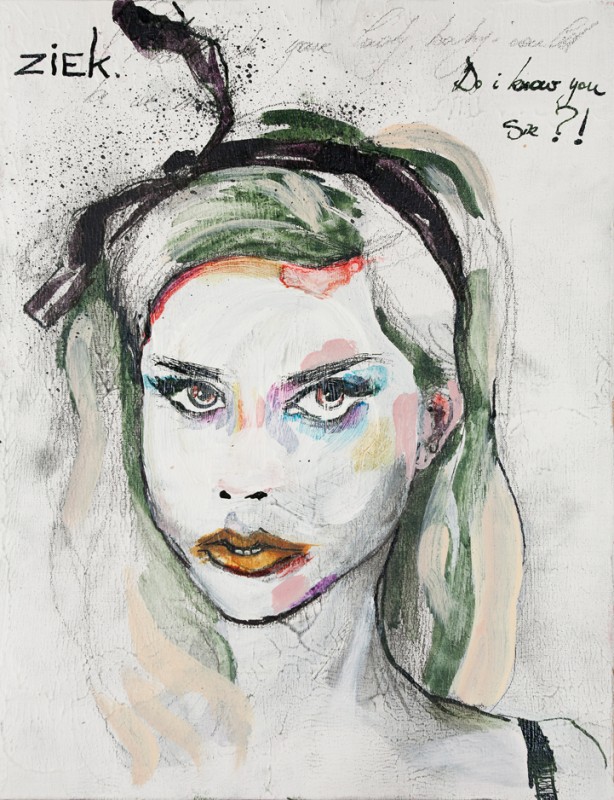 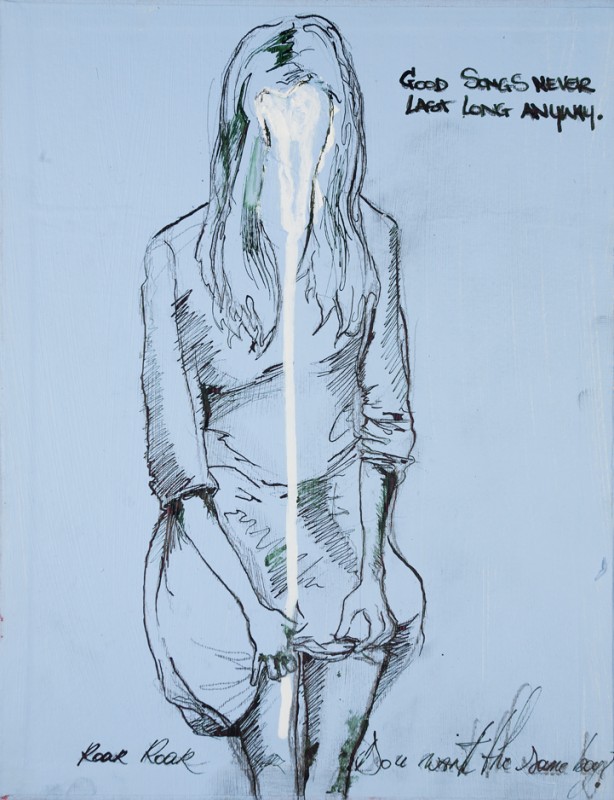 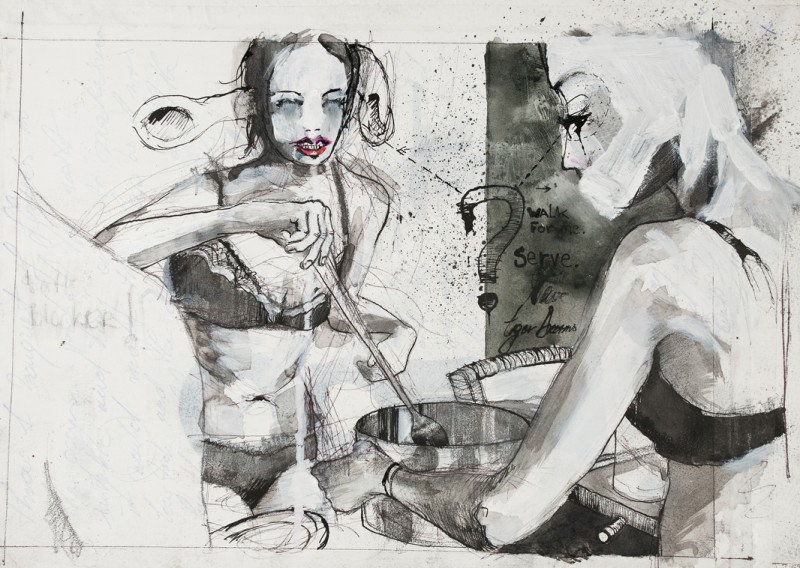 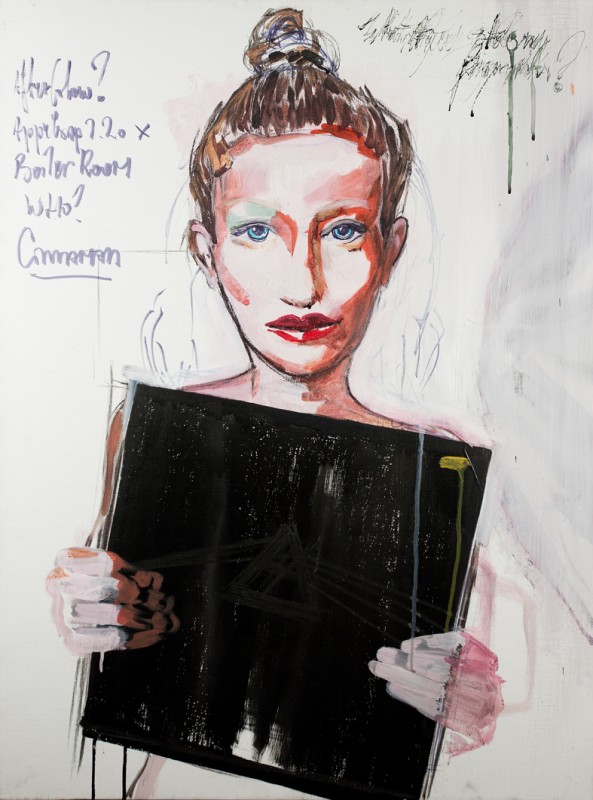 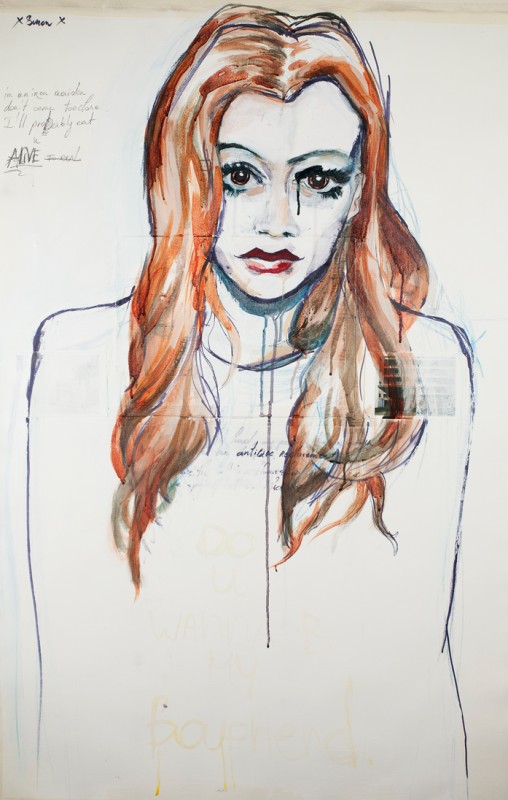 You can stop and admire Frederik’s work yourself at

Still can’t get enough? (and right you are!) Good news: Frederik recently collected major part of his work in a book (and it sure looks great). For more information on prices and orders: contact us through e-mail.

Also check out Fred’s Blog and his Tumblr page to stay updated! 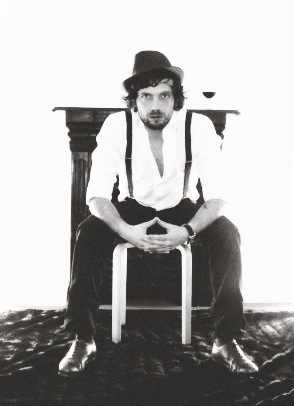 Israel’s second city and cultural and commercial capital, Tel Aviv was named “The Mediterranean Capital of Cool” by the New York Times. It’s a city that makes you feel alive. It’s constantly changing, moving, developing itself. Only a 100 years old (which is young for a city) and still, so much to be done. Luckily we have a lot of entrepreneurs here bringing in the things a city needs to sustain its adjective “hip”. The hippest thing in Tel Aviv lately is called F.A.D. It is a 30-day curated pop-up shop of limited edition fashion, art and design. 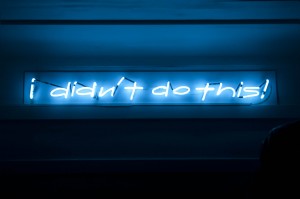 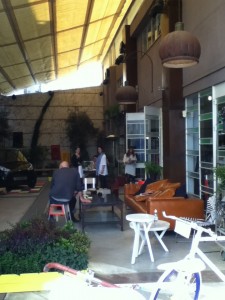 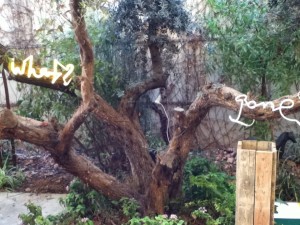 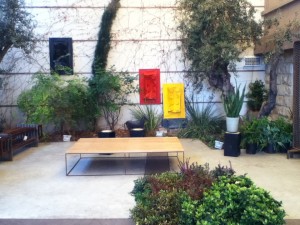 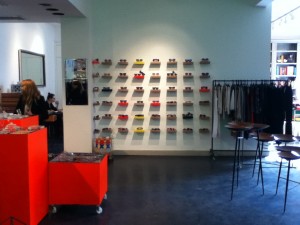 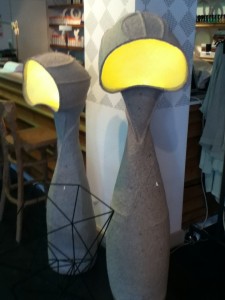 Created by Design Space* and Shoplifters**, this creative space is a multidisciplinary art project featuring all sorts of creative fields. A refined 1000 sqm space dedicated to Design / Contemporary Art / Fashion / Books / Music / Technology / Lectures and much more. From clothing to Art and Design, from flower shop to coffee shop, looking for products from israeli creatives, while browsing the library of magazine and art books. All aesthetic grounds are covered, from classics, to creations by young israeli designers, these girls are are precise collection fed by emotions and creativity. The space is hosting 40 industrial designers, and  18 contemporary artists – from Israel and abroad.

There will be special events including an exclusive private Wallpaper evening. In short: if you’re hip and you’re in Tel Aviv, you’ll visit F.A.D. Whether you shop till you drop, get inspired, do your nails, read a book, drink, eat, “mingle” or just be amazed and look around. Thank you girls – Nitsan, Anat, Gilat, Salome and Emmy.

*about Design Space: Design Space was established in 2010 to encourage artistic innovation and provide a platform for progressive art of all media, featuring both emerging and established artists’ work. The Gallery is presenting various fields of design, ranging from furniture and industrial products to diverse art exhibitions of newcomer artists and designers. Through collaborations with various creative sectors, Design Space produces projects and initiatives, extending its vision internationally.
As a gallery, design space organizes solo, collective, and group exhibitions, alongside presenting special projects and events conceived by outside curators. 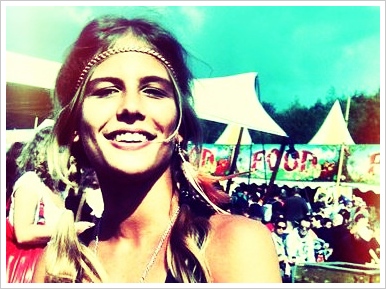 Although Antwerp’s artistic reputation was at its highest in the 17th Century (with artists like Rubens, Jordaens and Teniers), present Antwerp doesn’t have to taste defeat. To this day, Antwerp is a prominent art city that plays an important role on the international art market. Its artists are still of great importance in providing insight into current visual culture.

One of those great artists is young Charlotte De Cock (06/10/87). Born and raised in Antwerp, and with no artsy education at all, she started painting in 2007. She learned to paint portraits by staring in the mirror for many hours. When she finally felt like she mastered every little detail of the human face and body, she started to expand her repertoire with other themes, for example her famous “Marie Antoinettes” (based on the movie by Sofia Coppola).

Her inspiration lies in film, music and literature. Her paintings refer to song lyrics and movie titles. Martin Schmitt from Gallery DiMeo (Paris, France) referred to her work as ‘Rock – Baroque’. 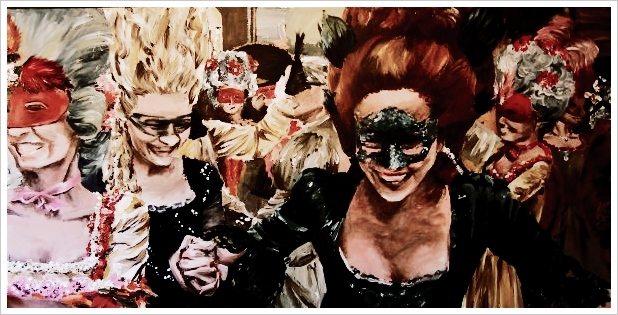 She has already been part of numerous exhibitions: “Body of Art” at the Liverpool Street Station (London) and the famous Antwerp gallery Campo&Campo to name a few.

Her latest craze is all about the Native Americans (or American Indians). While watching a Devandra Banhart concert (American singer-songwriter and visual artist) she didn’t only fell in love with him (who can blame her?) but also with his headwear: a full eagle-feather war bonnet which is a common American Indian headdress (fun fact: Devandra Banhart has actually seen Charlotte’s paintings and he’s a self-declared fan).

Inspired by her favorite Molière-quote (the greater the obstacle, the more glory in overcoming it), the search for feathered war bonnets started. Numerous Facebook announcements and phone calls later, she was allowed to use the war bonnets that used to be on display in the Indian Art Museum in Bobbejaanland (a Belgian theme park). The war bonnets were made by designer Nudie Cohn in the 1940s. With great caution and even greater love Charlotte started to portray the precious feathered headdresses on canvas. 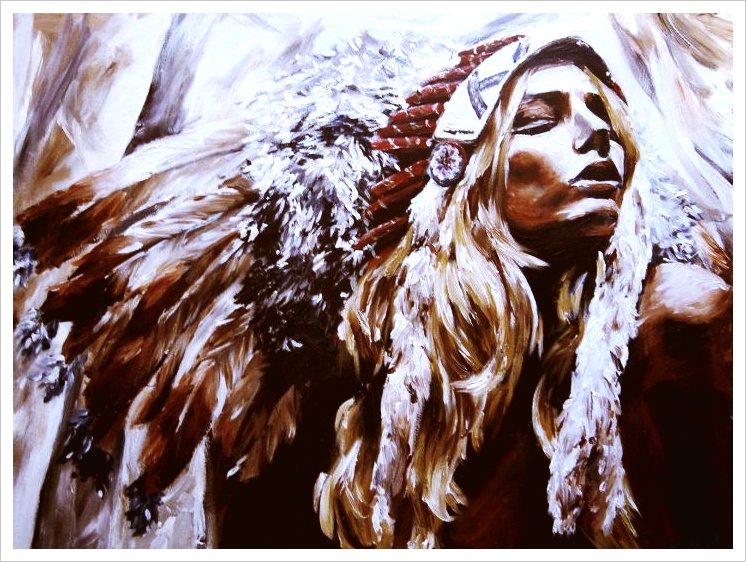 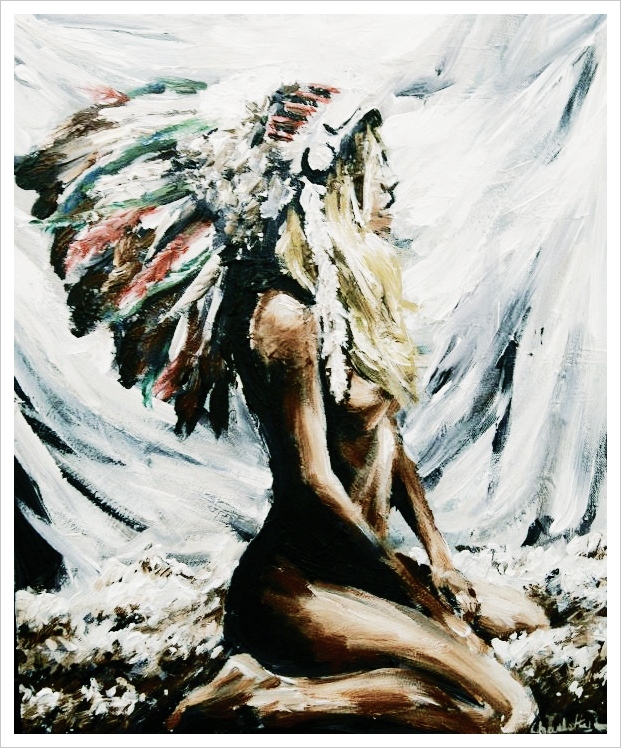 “I don’t believe in mistakes. Everything I’ve done, that has also led me into trouble, I think, is a lesson. Therefore I have no regrets.” Charlotte is a young, energetic lady with a broad fascination; psychology, music, history, film and lots of other things paint the soundtrack to her extraordinary life. Besides a painter, she’s also a DJ in famous Antwerp venues (Kissinger, former Café Capital and Café d’Anvers). Her music is all round, from Gainsbourg to Goose (for the musical dummies: from classic French rock to minimal techno). She designs her own clothes and – just like me – she has a passion for cake-baking.

To quote her deceased father Paul De Cock: “Her spontaneous ventures, her resourcefulness and her natural vivacity make her a cheerful person who has the necessary urge to develop her talents…” 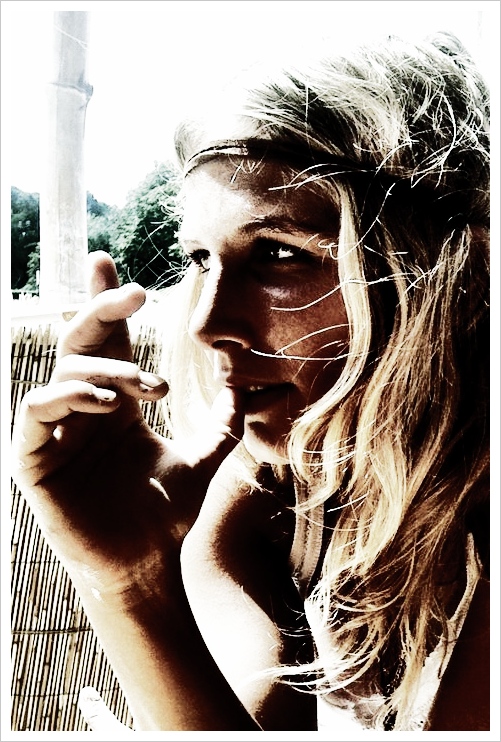 If u wanna see Charlotte’s work with your own eyes: 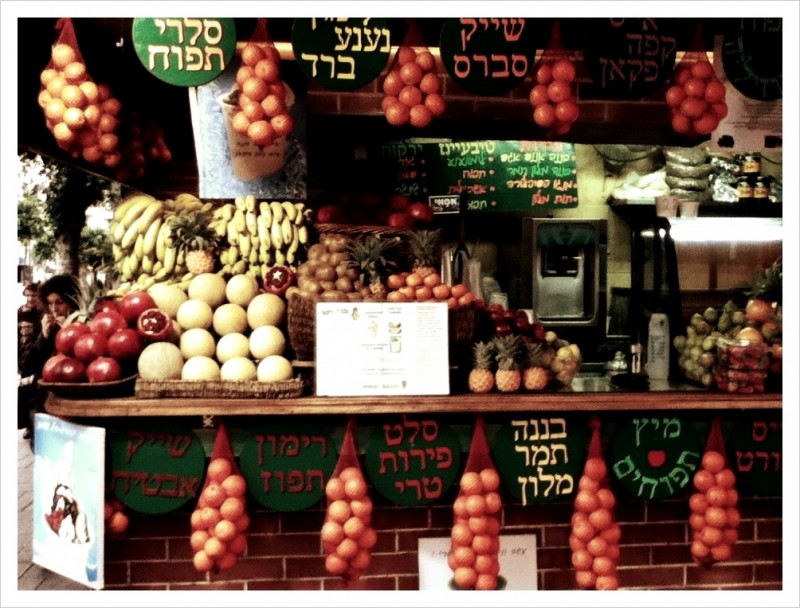 Is there a better way to start your day than with a fresh fruit juice? My favorite combination is banana, melon and dates, but it sounds better to say it in Hebrew: “banana, melon, tamar”. Dates come from the date palm (Phoenix dactylifera) and they have been a staple food of the Middle East for thousands of years. Dates provide a wide range of essential nutrients, and are a very good source of dietary potassium. The sugar content of ripe dates is about 80%, or in other words, a perfect substitute for sugar. My juice in one hand, blackberry and Ipod-touch in the other (do you wonder how I manage that? Well, both have broken screens from falling), I go on to my next step: textile searching. 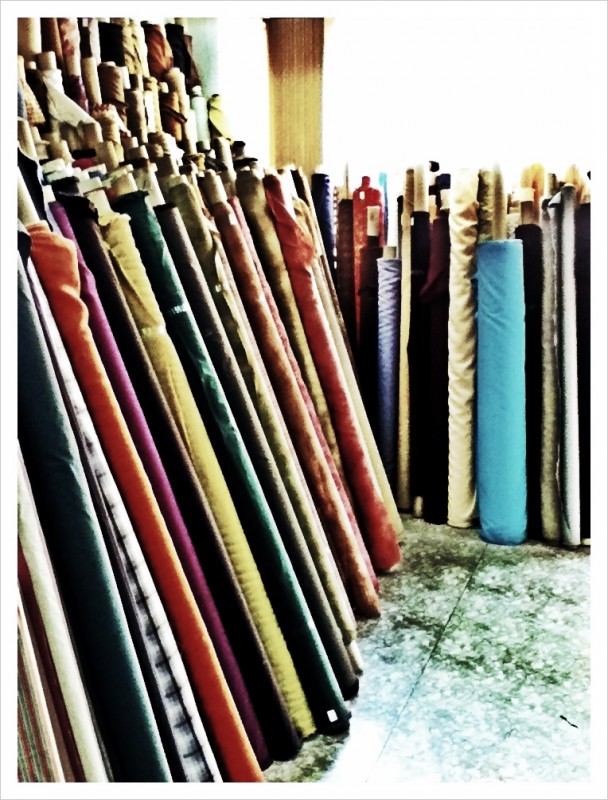 It’s only recently that I found myself interested in or should I say passionate for creating, crafting and D.I.Y. My latest? Sewing. I started a sewing class, ‘borrowed’ a real old-school Singer sewing machine and started discovering another yet amazing world. So I walk to Nahalat Benyamin Street, the textile center of the city, only a few minutes from my house on Rothschild Boulevard. This historic street was established even before Tel Aviv was born in 1909. Formerly a run-down province of the textile and haberdashery trade, recent years have seen it redeveloped and rejuvenated as a busy pedestrianized precinct full of fashionable cafes and arty shops. Today I’m looking for denim-like textile for a shirt for the next class, but as I discover a tiny store with so many colors and fabrics, I of course end up buying more. In my head it goes like this: here, this fits for pyjama pants, this for a scarf, this for a pillow, this for the inside of a pouch and so on.

Later today, after procrastinating for months, endless repeats in to-do lists and phone reminders AND one car ticket too many, I will get to the municipality for some parking stuff  (do you guys have Easy-park in Antwerp?). The Tel Aviv-Yafo municipality (http://www.tel-aviv.gov.il/english) is really very active, efficient, young, involved and hip. Today there is some art on the stairway. 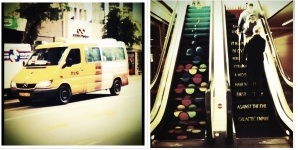 No way I’m taking my car there, so there are 2 choices left: my bike or the “monit sherut”. FYI: my bike is a Belgian bike of over 35 years that I brought with me when I moved here in 2007. My mom used to ride it with me in the back. It’s an old school bike and people stop me in the street to ask me where I bought this retro cool bicycle. A “monit sherut” is a share taxi that falls between a taxi and a bus. Sherut meaning service, these yellow vans follow fixed bus routes and you can stop them anywhere. Payment is done by passing money to the driver in a “human chain” formed by the passengers seated before. The change (and the receipt, when requested) are returned to the person who paid by the same means.

As this being my first blog and just a fragment of my life and of this day, how do I end it? I’ll just share my last ritual of the day: my favorite Yogi tea in my favorite cup.